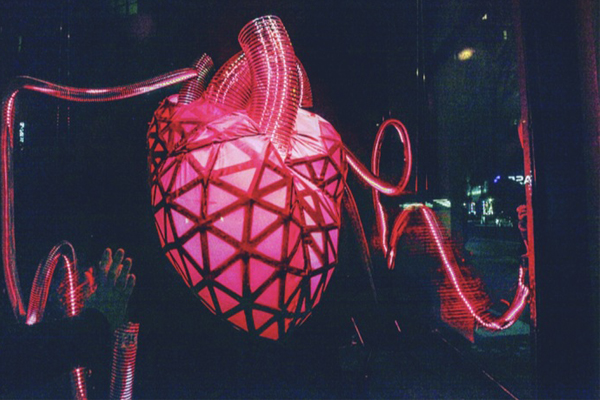 Ariana Vassilopoulou and Lindsey Piscitell first came together in the winter of 2017 during their second year as graduate students at New York University’s Interactive Telecommunications Program. Working through a variety of mediums, Ariana and Lindsey eventually created cityBEAT, which in its initial form lived as an interactive window installation along Broadway in New York City. Coming off the success of that installation, they continued to tour their piece in additional New York locations. Most recently, cityBEAT made an appearance at New Orleans’ holiday light festival Luna Fête. For this installation, expert fabricator and fellow ITP alum Regina Cantu de Alba joined the team to lend her expertise to cityBEATS outdoor fortification. Each of the women hold an MPS from NYU/Tisch and have applied their skills in a wide variety of settings post-graduation as design consultants, fabricators, site producers and activation strategists.

cityBEAT is an uncomplicated yet beautifully crafted experience where strangers catching glimpses of each other can share in a moment of connection and simple delight.

In his oft-referenced essay Here Is New York, E.B. White mentions that New York offers its residents the prizes of loneliness and privacy. In any crowded place, you can stand among thousands and feel the same solitude that one might feel standing in a wide open space with no one in sight for miles. This can be alienating, but it can also be a gift. Strange angles and odd glimpses afford usunique moments of intimacy. This strangeness, this oddness, and ultimately the curiosity it inspires can be felt anywhere, and is what guided the creation of cityBEAT.

In any setting, cityBEAT is not about what is inside its bright, beating heart, but about the interactions that surround it. cityBEAT aims to highlight and contextualise any space in which it lives, not only by speaking to its surroundings, but by forcing the people that surround it to speak to and interact with each other.

In its first iteration, cityBEAT was built to be a window installation, but has since been presented and displayed in a variety of fashions suited to a space’s needs in both indoor and outdoor settings. It allows strangers to connect with each other in passing by prompting them to press their hands against standalone palm press “stations”, and follow the light they generate as it travels into a giant beating heart. When two people connect at the same time, the heart beats stronger and brighter, eventually filling the whole space with its unique light.

The installation is comprised of 270 lazer cut triangles, 50 feet of vaccum tube, 30 yards of velvet and silk and 3,000+ neopixels, and is supported by two custom fabricated micro controllers and touch capacitive sensors.